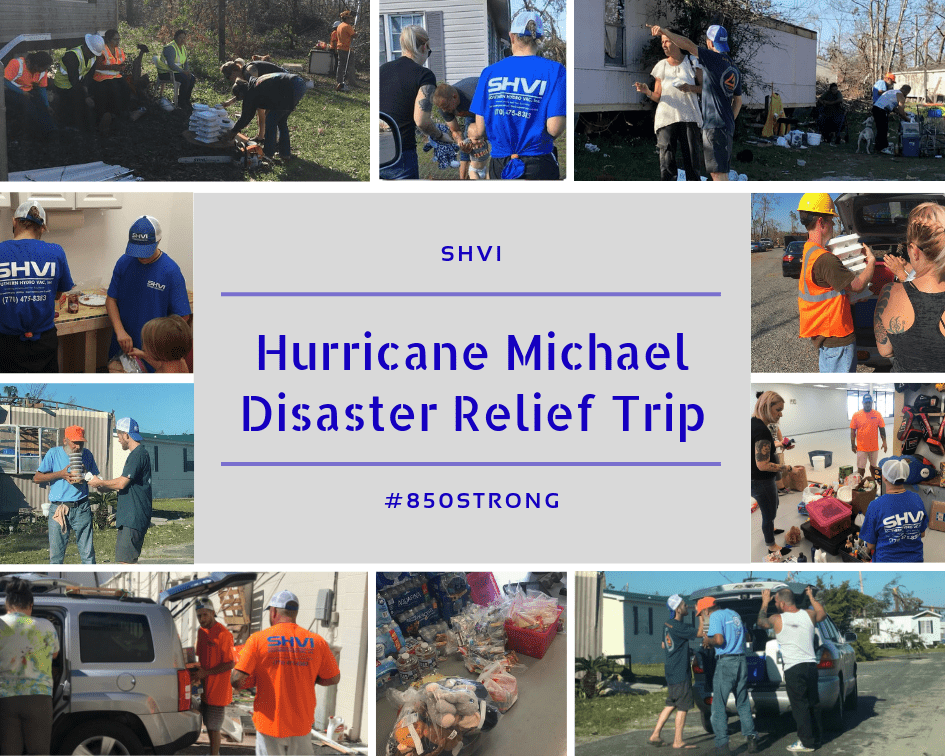 Hurricane Michael pummeled into the Florida Panhandle with a momentous amount of force on October 10, 2018. The Category 4 hurricane made landfall at Mexico Beach with catastrophic 155 mph winds reaching the Category 5 threshold, accompanied by a towering storm surge that peaked between 9-14 ft (depending on the area), tornados, and torrential rainfall. This intense storm was the most powerful to ever hit the Panhandle, devastating roughly 200 miles of beaches, coastal communities and military bases. Michael’s path of destruction continued inland sweeping through southwest Georgia and southeast Alabama as a Category 3 storm with winds still reaching 115mph. The night of the storm, it was reported that at least 192,000 Florida homes and businesses were without power, as well as over 32,000 more in Georgia and about 3,000 in Alabama.

The morning that the hurricane made landfall, Florida Gov. Rick Scott stated that authorities were already focusing on recovery efforts for after the storm hit. 3,500 members of the Florida National Guard were already activated, along with thousands of utility workers who were on stand-by. The local power company’s electric system was left in shambles. At the peak of recovery, they had approximately 7,500 line workers and storm personnel, from 16 different states and Canada, working around the clock to restore the system. 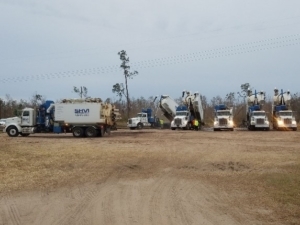 Southern Hydro Vac, Inc. (SHVI) spent the first week after the storm in Albany, GA working with the local power company to restore electricity to Georgia residents affected by the storm. By week two, it was very clear that Florida needed more manpower to get the power company’s 120,000 customers still left without power, back up and running. SHVI sent ten Hydro Vac Trucks, a remote crew, backfill, mechanics, and two members of management. As the team traveled to Florida, they were taken back by the progressive amounts of devastation as they got closer and closer to 850 area that had been in the initial path of Michael when it first made landfall. Trees, light poles, signs, and even entire buildings were merely rubble which was now scattered for miles. 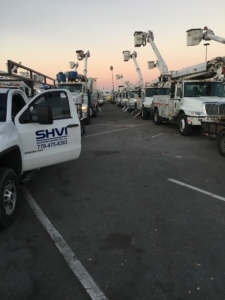 Upon arrival in Panama City, the SHVI crew was checked in and given information on how their days would be structured, as crews were working 14-16 hour shifts around the clock. With a lack of accommodations, compliments of Michael, all relief workers had to stay in designated FEMA camps. Most of the crew had never seen a FEMA camp and were a bit shocked by the confining accommodations. In fact, many team members expressed that it was this point when reality set in, yielding true comprehension of their purpose for being there. Andre Anderson, SHVI Project Estimator/Marketing Representative, affirmed that as this realization of severity and purpose was understood, the perception and expectations of the team immediately changed.

Each morning started at 5am with a FEMA provided hot breakfast for the thousands of power company representatives and contractors. FEMA provided hot meals twice a day (breakfast/dinner) and a bagged lunch for each worker. Then it was on to the equipment laydown yard, which housed hundreds of boom trucks, support vehicles, law enforcement, and plethora of other equipment. The team noted it was unlike anything they had ever seen. That it was actually quite breathtaking, and certainly did not look like anything they had seen on TV. Jan Enlow, SHVI Service Coordinator, and Andre Anderson shuttled crews to the laydown, which required a minimum of ten trips. Jan Enlow coordinated the crews with guidance from the power company representatives to ensure maximum productivity, which was quite the task with little to no cell phone reception due to the storm. Hydro vac crews consisted of a crew leader and an apprentice. The application of two-man crews was aligned with the power company’s safety standards and ensured the wellbeing of the workers and equipment despite all the dangerous debris and downed trees everywhere. SHVI crews were shared between contractors, the power company, and subcontractors, and consisted of non-stop movement of crews and equipment. Much of the team’s time was spent helping replace the thousands of powerline poles that had been damaged or completely destroyed. SHVI’s expansive knowledge and experience with digging loose sand soils proved to be vital in this process. Hydro-excavation methods allowed the crews to dig around existing underground utilities without any further damage. They would excavate right around the poles, which were held upright by the line trucks. Then, they would agitate the soils until they were able to sink the pole to the required depth. Once the poles were set at the appropriate depth, the SHVI backfill crew would finalize the process by filling and packing the holes to secure the poles in place. Jan’s expert coordination skills, along with the SHVI crews’ level of expertise, proved to be crucial elements in the efficiency the power company displayed in quickly restoring power to the residents. The power company later declared that over 95% of their customers that were able to receive power had it restored within 13 days, which was even quicker than they had estimated.

Working such long hours through ten workdays straight definitely took its toll on the crew. Everyone suffered from extreme fatigue, alongside the thousands of other storm disaster relief teams assisting with outages. Some of the guys had never been away from their families for such a long duration and the combination of missing the luxuries often taken for granted and the extreme exhaustion started to wear on the SHVI team. To help combat this, they started each morning with a pre-work meeting. The intentions were to boost morale by discussing the previous day’s actions, safety procedures, their purpose in Florida, and the appreciation for each one of them and the sacrifices they were making to help others in desperate need. Despite the less than stellar conditions, the crew pushed hard every day to ensure the output of quality work with a can-do attitude and, most importantly, to help restore power to the residents of Panama City, FL. This was the ultimate team building exercise. All our men lead by example, demonstrating why Southern Hydro Vac, Inc. is the leader in hydro excavation. 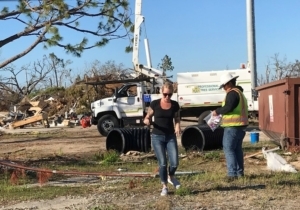 After returning home, the whole company sat down and reflected on the experience, how the team felt about the situation, areas needing improvement, and efficiency of our service during the Hurricane Michael relief efforts. Despite the hard work and exhaustion, the team was glad they were able to help those in need. However, they wanted to do more. This led to SHVI teaming up with a local Panama City Beach gym, Rilion Gracie BJJ, that had been serving as a donation drop off and distribution point. The owner of the gym, his wife and few others from the community had been making sure all the goods were delivered to people in the surrounding areas. They even had teams of people going out and helping individuals with cleanup, cutting down fallen trees and debris, tarping roofs, making and delivering hot and bagged meals to those who lost everything, as well as to the line workers and volunteers who had been working so diligently to get the area up and somewhat running again. Within a week of the SHVI crews returning home, a few headed back to Florida with a truckload of donations and an eagerness to volunteer. The next few days were spent organizing donations, loading goods to be delivered, making meals, boxing and bagging meals, and out in the community helping those left in destitution by the storm. The SHVI employees, knowing first-hand how drained the line workers and volunteers had to be, were gratified to help deliver warm meals and water to those who were still in the position they were in just the week before. Overall, the volunteers out of Rilion Gracie BJJ in Panama City Beach have raised thousands of dollars, tarped countless roofs, delivered hundreds of meals and necessities to those in the most need, and have made it known to the people in the area that someone cares about them and that a helpful community spirit is often strongest after an unfortunate disaster. SHVI feels fortunate to have taken a small part in this and to have been able to help the people of the 850 area.

Hurricane Michael may have been one of the worst disasters in the history of the area, but the mission it sent us on proved to be greater than anything SHVI had ever experienced before. As a company and as a team, we served our purpose.

Southern Hydro Vac, Inc. would like to recognize the brave men that scarified and made themselves available to help during this time of need. SHVI logged roughly 4,252 man hours in relief efforts. The table below marks each employee’s name, company tenure, job title, and relief hours worked.

Do you have questions about service or a quote? Send us a message! We’d love to hear from you!